You can BROWSE Handshake Mercenary with HNS.to - but to signup / login / post - you need to use an HNS resolver - read our POST AND GUIDE HERE ON HOW TO DO THAT.
Once you have HNS resolver or Beacon Browser - please go here: http://handshake.mercenary and then you can signup and post and contribute. We welcome you and want more HNS usage and adoption.

But the big highlight was Ryan came on stage - he raised his hand and I pulled him up. After a few other Q&A he started to share his story.

Based in Miami, he heard about Handshake and was looking for the right name/domain TLD to bid on. He was DM’ing Steve McKie in Twitter on tips on how to bid and the strategies.

You can see the auction action here:
https://www.namebase.io/domains/nft

He had to borrow 25% (I believe from my memory it was 25%, may be off on percentage) from his brother to make the bid, cutting his brother in on the deal.

So much to learn here

1) Namebase helped broker the private deal? No one had heard of this before.
2) The sale was not for HNS, but USDT
3) It was done in escrow

This is in different currencies (buy side and sell side) but let’s do some rough numbers:

And he paid out his brother approximately 20,000 USD - which has no clue at all on Handshake - talk about a crazy return for his brother.

Everyone in the Clubhouse call was totally floored and amazed and wondered why this wasn’t in any news article. Ryan said it was a more private deal and the buyer didn’t want it to be too high profile.

For more reading on aftermarket sales on the forum:

You can read an amazing post here on Handshake Mercenary about the XX/ sales by WTFman user here:
viewtopic.php?f=7&t=85


Also a post by herd/ on the top Namebase aftermarket sales here
viewtopic.php?f=7&t=98


Getting great support in the community


We wonder what the future is for marketplace sales, especially now that the 1 year release period is ending Feb 14, 2021.

very inspiring thanks for sharing.
---
-
-
Follow the herd/
Top

some have been asking me about wallet/ selling for 350,000 HNS as the previous biggest sale.

it also was mentioned in Coin Telegraph:

more articles and links about this amazing deal. 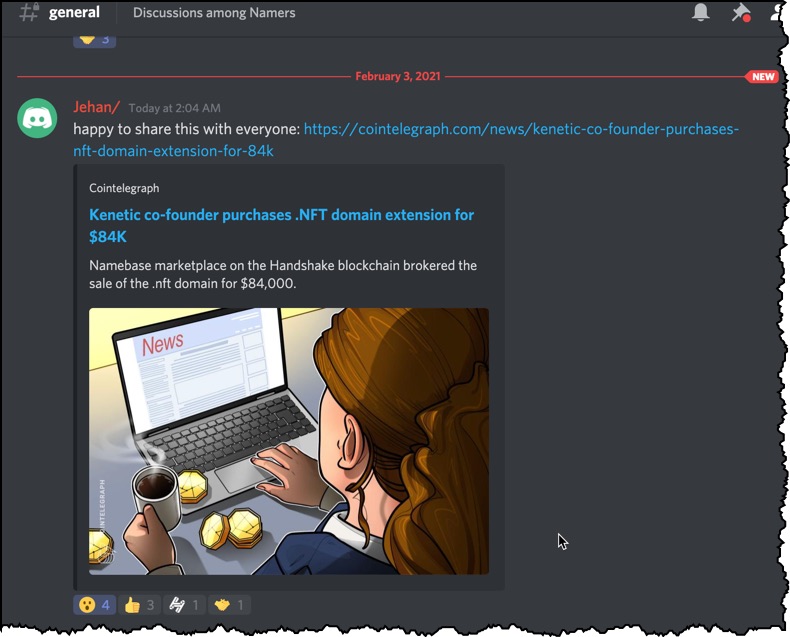 and more articles covering the story:

HNS.to is a highly insecure way of browsing Handshake domains and should only be used for demo or educational purposes. Click to see preferable resolutions methods